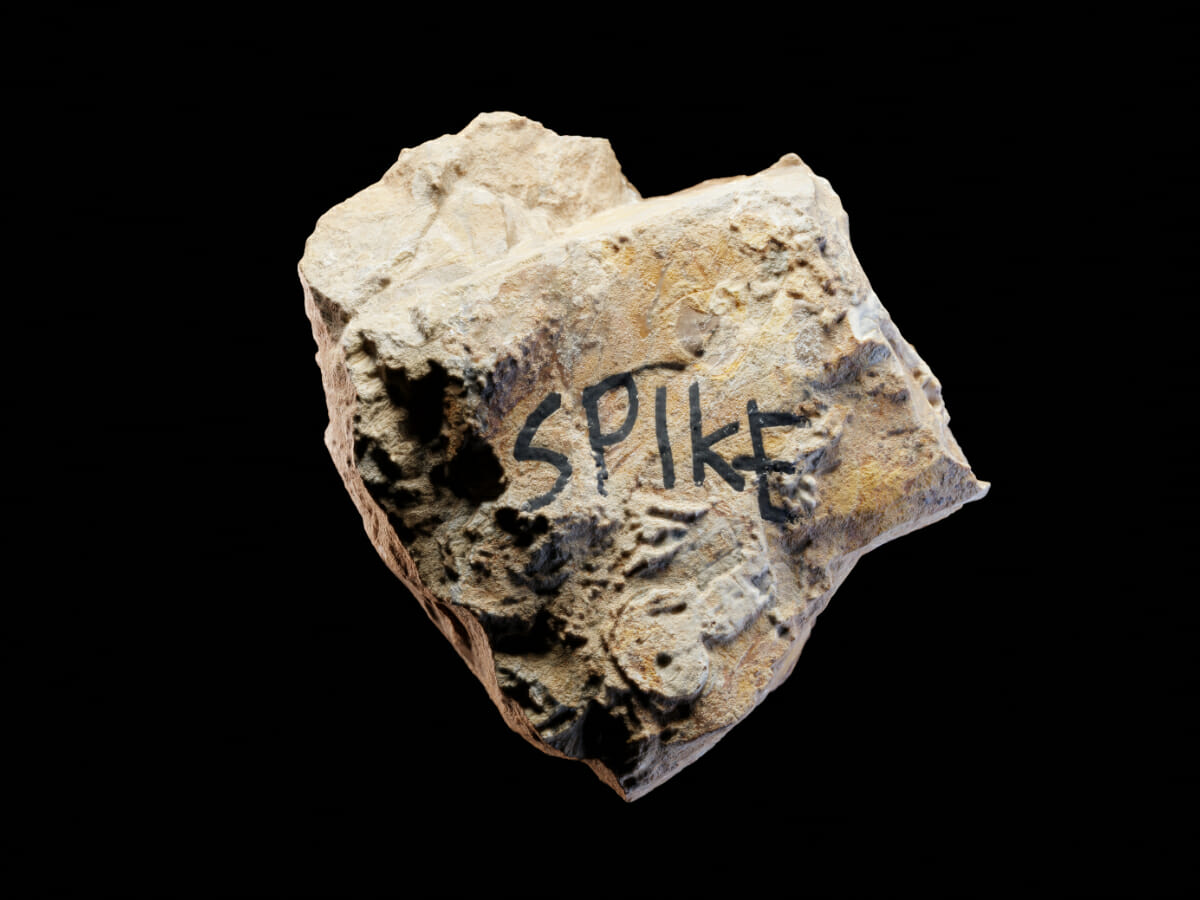 Have an Exclusive look at the latest teaser for our Spike by Banksy NFT Drop!

Wow…already another week has gone by and WHAT A WEEK full of intense news in the Crypto and NFT space.

I’ll start off with the biggest news that concerns you directly – these last few weeks have been long, I know you have been feeling impatient, but our NFT drop “Spike” by Banksy and auction is going to finally be live today, July 22nd, at 10:22 p.m CEST!

As the early members of our newsletter, we want to share with You, exclusively and in a world premiere, the second part of the teaser we created for our first NFT drop, “Spike” by Banksy. Have a taste before anyone else of the magical experience created by combining this unique Artwork with the exceptional voice of Vittorio Grigòlo!

Just to give you a brief historical background, the original physical art piece was created by the artist Banksy back in 2005, consisting of a stone belonging to the wall that divides Israel and Palestine.

After writing the word ‘Spike’ on this stone, Banksy hid it in Palestine, declaring that the person that was able to find it, would obtain an Authenticity Certificate.

Fast forward to today, and the owner of this piece is Vittorio Grigòlo, Italian operatic tenor and co-founder of Valuart, who has decided to share it with the world by minting it into an NFT.

And that’s exactly what makes this piece so special – this NFT will be accompanied by Vittorio’s voice, all while visually floating in space until its final landing in the DeadSea… A piece that will be able to reach and stimulate all senses.

In addition to this sensory experience, half of the earnings will be donated to charity in order to sustain global victims of conflicts: one of the main goals of this auction.

On the evening of July 14th, the Bondly team and community went to bed with the news crypto enthusiasts dread the most – Bondly Finance got attacked, resulting in a hacker getting away with over 5 million dollars. 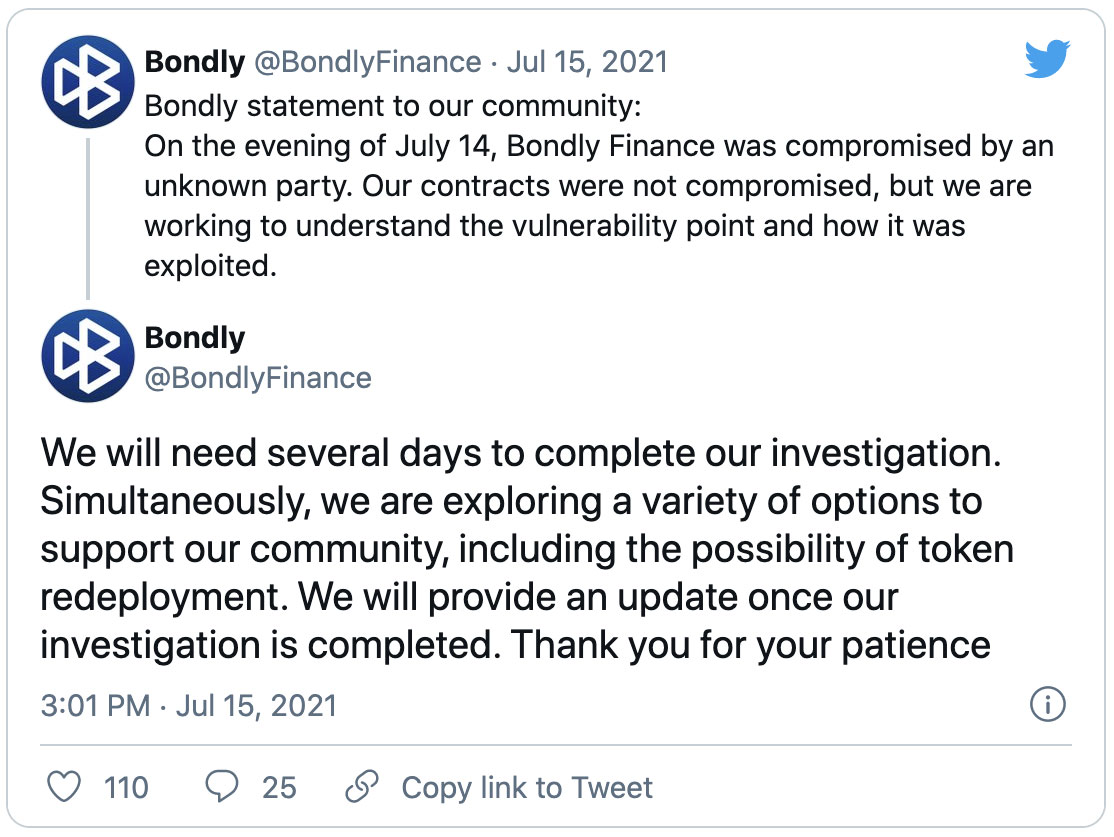 All of this, because the hacker was able to take advantage of a mint bug, resulting in the dump of millions of non-existing BONDLY Tokens.

It did not take long before the value of BONDLY Token declined around 90% and that most of the BONDLY community on Twitter started suspecting a rug pull, since from a technical standpoint the infinite mint bug can’t be performed without the smart contract’s owner authorization; not to mention the fact that they were slow when it came to communications and responses to the community.

CEO Brandon Smith even stepped down as CEO shortly after the incident and announced that Harry Liu, Co-Founder, would assume the role. 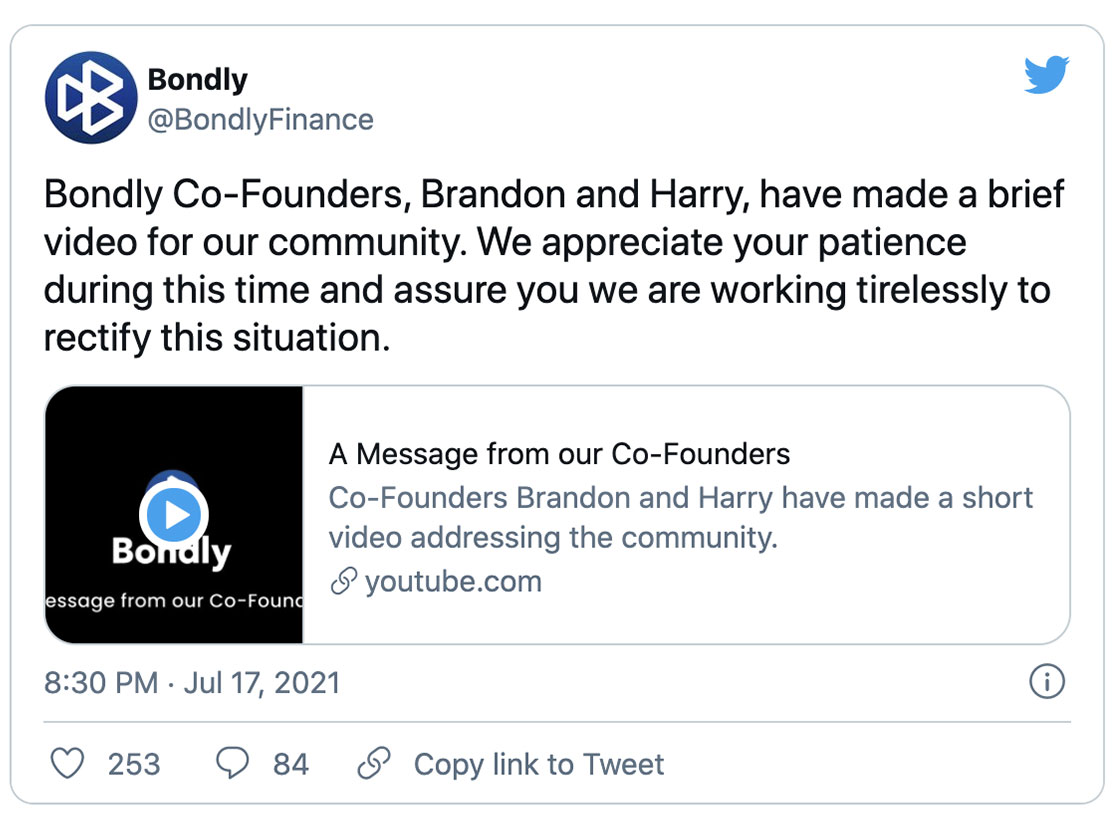 So what is the plan?

Possibly the creation of a new token… But in the meantime, BONDLY Token holders are left with millions in losses and a suspiciously unresponsive team. Now, the question is: why is the BONDLY Token pumping again?

Ethernity Chain to mint “Copa America” Trophy as an NFT

Copa America is South America’s top continental cup, that takes place every 4 years: 2021 marks the 47th year of this tradition, and Argentina was able to beat long-time rival Brazil 1-0 in the final game. This title is definitely a huge deal for the nation, as it had been 28 years since they last won the title.

But the coolest part is that CONMEBOL is not only planning to mint this NFT but also 4 other NFT collectibles, including the Argentine captain, Lionel Messi.

NFTs have been taking over the Sports space and revolutionizing the way fans interact in the last year, and this is only the beginning of this exciting world of Sports Collectibles.

Last but not least, starting from this second edition of my Newsletter, I wanted to start sharing a weekly chapter of ‘Izzy’s Book Club’ where I’ll share with you my favorite reads concerning futuristic, tech and crypto topics.

This week, I’d love to start off with a book that I think everyone should read, whether before getting acquainted to the crypto space of already deeply involved: The Spatial Web: How Web 3.0 Will Connect Humans, Machines, and AI to Transform the World, by Gabriel René and Dan Mapes.

Being personally immersed in Virtual Reality on a daily basis, this book captured my heart immediately.

But it is not only a book for VR lovers of techies in general – it is an amazing book that goes into depth of all technologies such as Blockchain, VR, IoT, 5G etc. accompanied by examples and illustrations, for anyone who wants to become more acknowledged about these topics.

This book unleashes the mind-blowing ways these digital technologies are going to be merged together and work compatibility very soon, changing our culture and lifestyle for good.

We are entering a new era, the era of 3.0. and it would be a shame to miss out on being the pioneers or this digital revolution.