Yup…I know…Everything seems pretty flat right now that we are apparently in a bear market, but if you look close enough, you’ll notice that there are actually some pretty cool things going on…We’re just ramping up for the exciting year in front of us!

For starters, Solana Wallet Phantom has raised $109M and is now valued at $1.2B, I would say a solid rival to Metamask.

Crypto venture firm Paradigm committed to a $109 million Series B investment in Phantom, CEO Brandon Millman announced on Monday. At the moment, the main product is a Chromium browser plugin but soon to go mobile: on Monday, the company also debuted its very first iOS app. (the Android offering will be available later in the year) 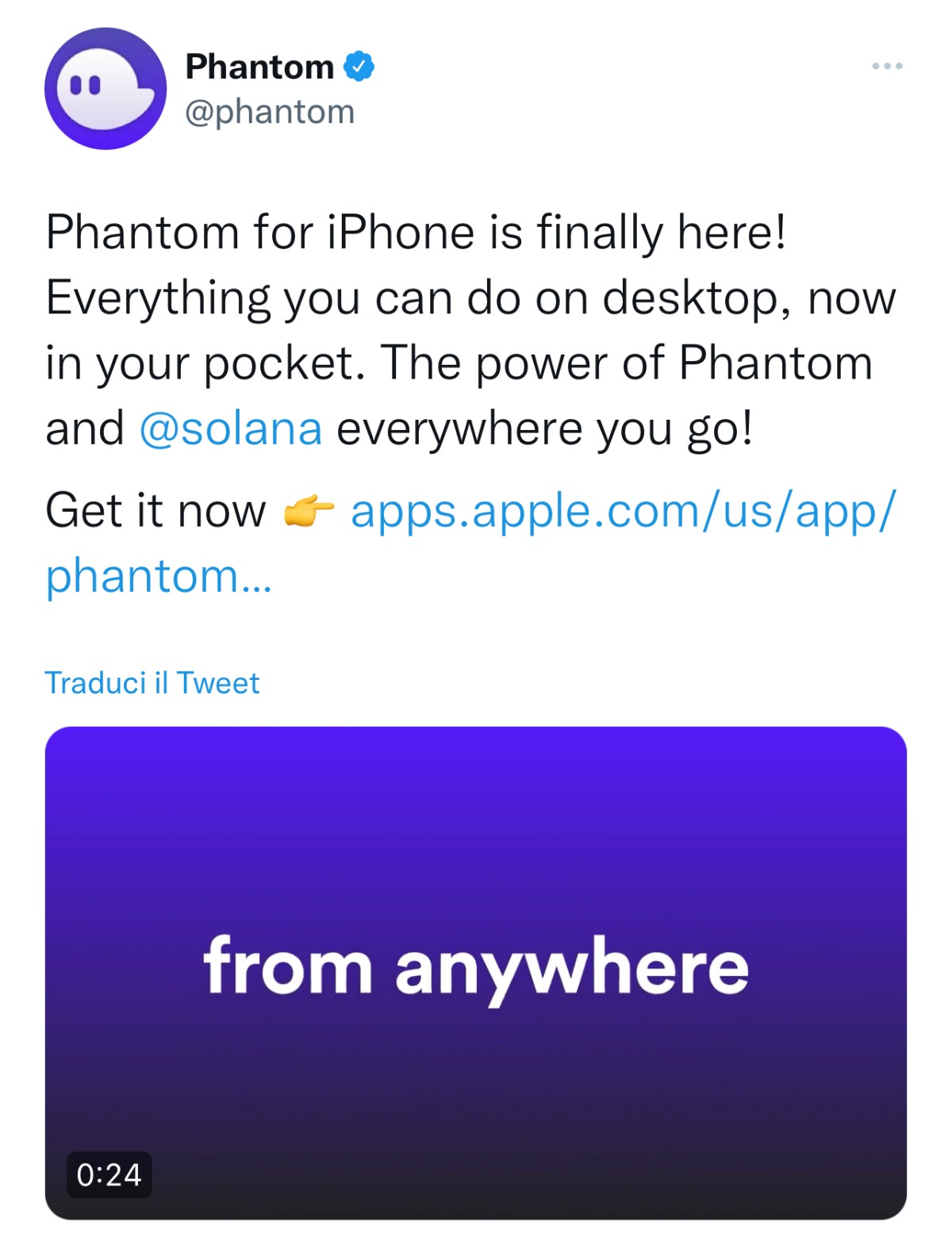 Amid rising criticism around the topic of “a lack of open-source” Millman, CEO and Co-Founder of Phantom added that Phantom “definitely has aspirations” to go open-source but “it has been difficult to prioritize.” It hasn’t yet due to a mix of operational, practical and competitive considerations, he said, but that once that “Pandora’s box” is open it will be impossible to go back.

One thing is for sure, Phantom will be taking advantage of the bear market to build an even stronger infrastructure…

But that’s not all that’s going on in the Crypto space: a couple of days ago, Shopify CEO, Tobi Lütke, announced he is now joining Coinbase’s Board of Directors.

“The concepts of decentralized finance and entrepreneurship exemplify the promise of Web3 where opportunity exists for the many, not the few,” said Tobi Lütke. “Coinbase and Shopify share this like-minded vision, and I am excited to join the Board to support the future that Brian and the Coinbase team are building.”

Meanwhile, in the NFT space, OpenSea has hit it’s all-time record in January, reaching $5 billion in sales, surpassing the all-time high of $3.42 billion set in August 2021.

The most popular NFT collection?

BAYC has no intention of leaving the spotlight, and still retains the most popular and seeked for NFTs upon a report by CoinTelegraph. To go further into detail, The Bored Ape Yacht Club (BAYC), a collection of 10,000 unique bored apes created by Yuga Labs, has at the time of writing generated more than $1 billion in total sales.

And celebrities are not missing out: in early January Eminem spent nearly £334,000 (around 123.45 ETH) to buy a Bored Ape that resembled him, and last Saturday, Justin Bieber purchased a Bored Ape for 500 ethereum, worth approximately $1.39 million. On Instagram he showed off his purchase, a Bored Ape with teary eyes, adding the lyrics of his recent hit “Lonely” as caption. 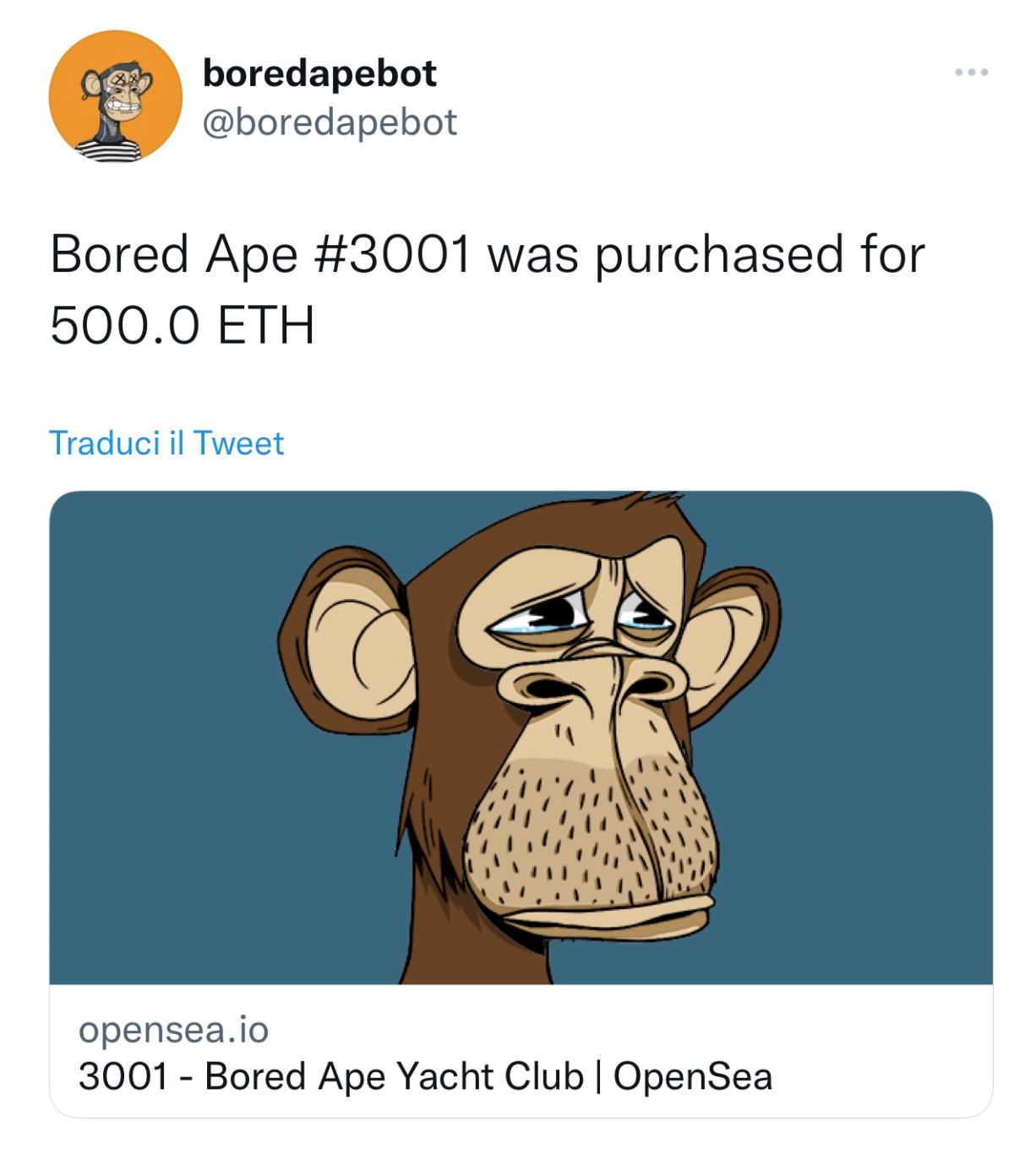 But if on one side, many celebs are showing off their latest NFT Purchases, Kanye stated he is contrary to NFTs, and focused on building products in the real world.

But he did add “ask me later” when signing off…Maybe an encrypted clue that he may actually be secretly working on something in Web3? 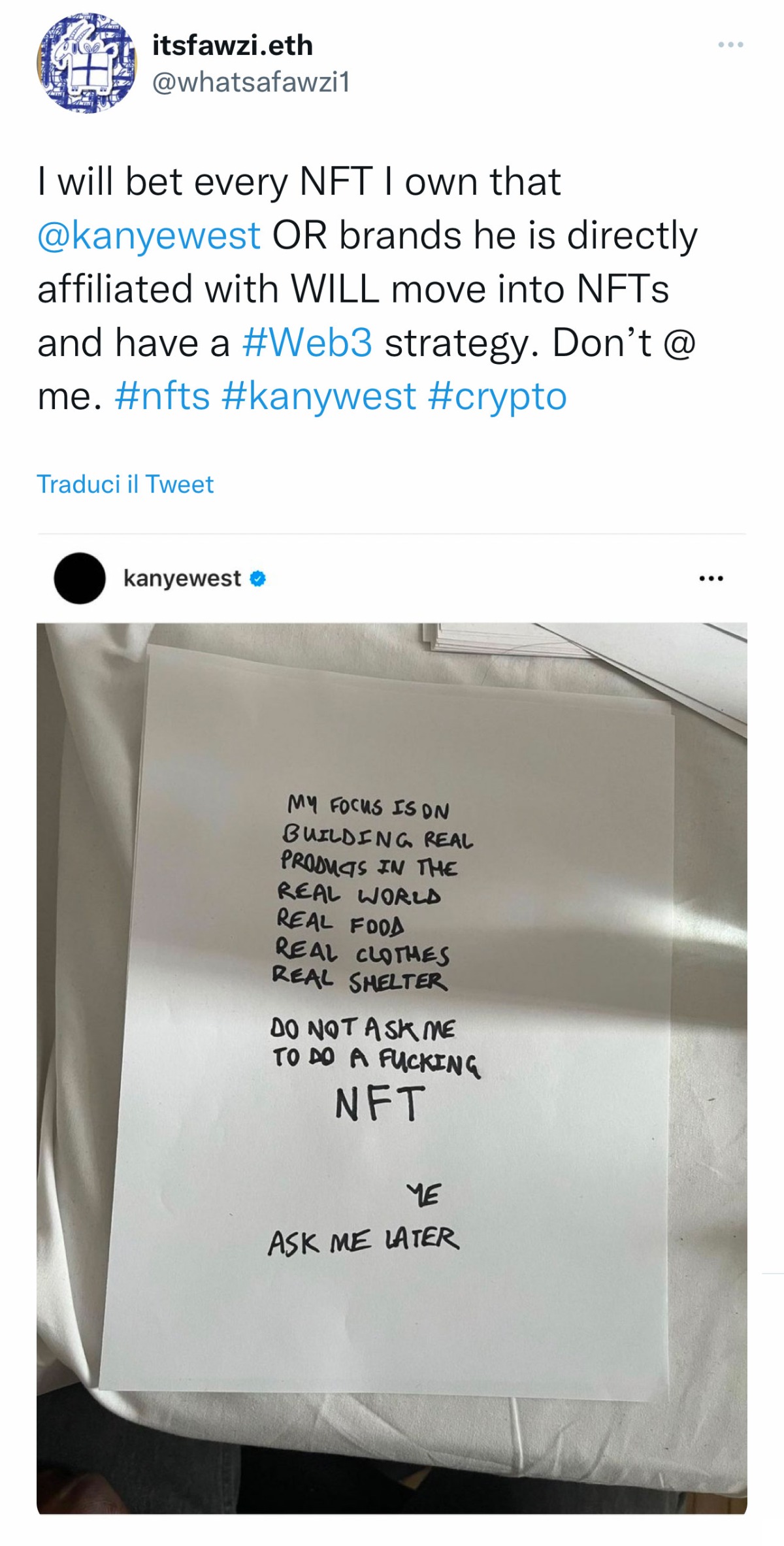 Fans are already speculating on the fact that in 2 years time Kanye will be one of the key players within the Fashion NFT space. Only time will tell.

I’m always on the watchout for new NFT projects myself, and stumbled upon an article on NFTPlazas this weekend which introduced me to a project that intertwines the passion for Trading, Art, Data and Blockchain Technology: The Art of Cryptowaves.

Purchase Crypto History? Now you can.

The Art of Cryptowaves’, a collection by artist 288kArtScientist, is composed of 3,139 unique NFTs, each capturing the most impacting trading patterns of BTC and ETH throughout the years.

These crypto trading signals are represented as bright and colorful waves that are bound to take you back to all the waves of emotions you’ve ever experienced when partaking your crypto journey: passion, intuition, fear, excitement…Faith.

In essence, each artwork reflects the author’s Ikigai:

“My Artworks aim at conveying both aesthetically appealing digital artifacts, and emotional connections between the viewer, collector or investor with the concept depicted.” 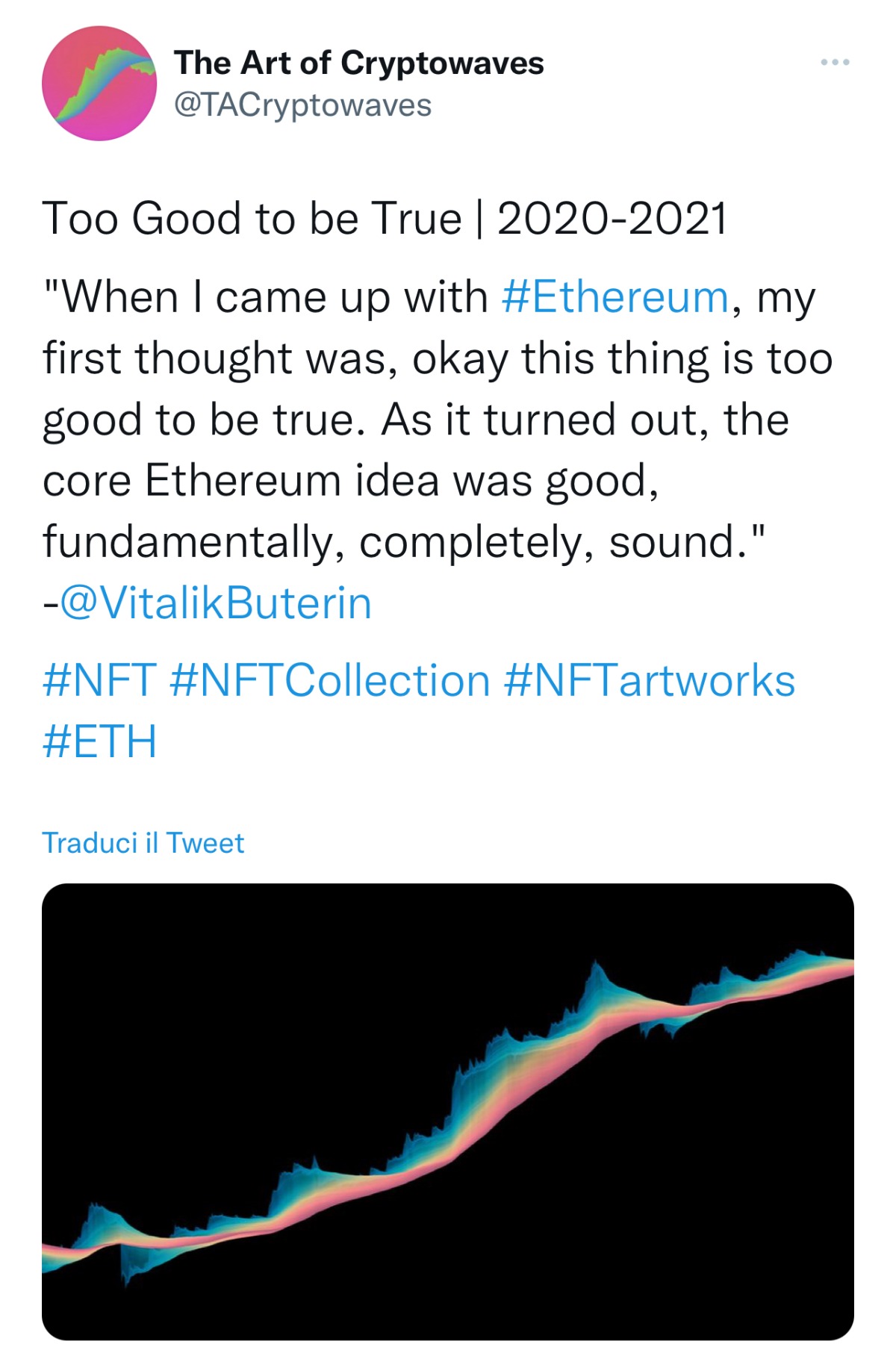 The minting opened in mid-January, with the first batch of Crypto Waves featuring only 80 units – Definitely the most rare ones, featuring the 2020-2021 moments, probably the most intense period when it comes to our emotions in this space.

So what’s up next?

Shortly, the team will be rolling out the next stage of the project, which will consist in adding even more BTC and ETH cycles , as well as NFT giveaways, charity donations chosen by the community and further partnerships.

P.s. Not to mention that not only can you get the NFT, but also the art piece on a physical Canvas. Definitely a work of art that will sparkle a conversation with your guests at home! 🙂

Read more about the project here. And stay tuned for the upcoming second collection coming up in March-April, that I’ll be keeping an eye out for as well.

This week I’m going to be good with you, and suggest a short and easy read of 100 pages: Trading Wisdom, 50 lessons every trader should know, by Cheds @Bigcheds on Twitter. 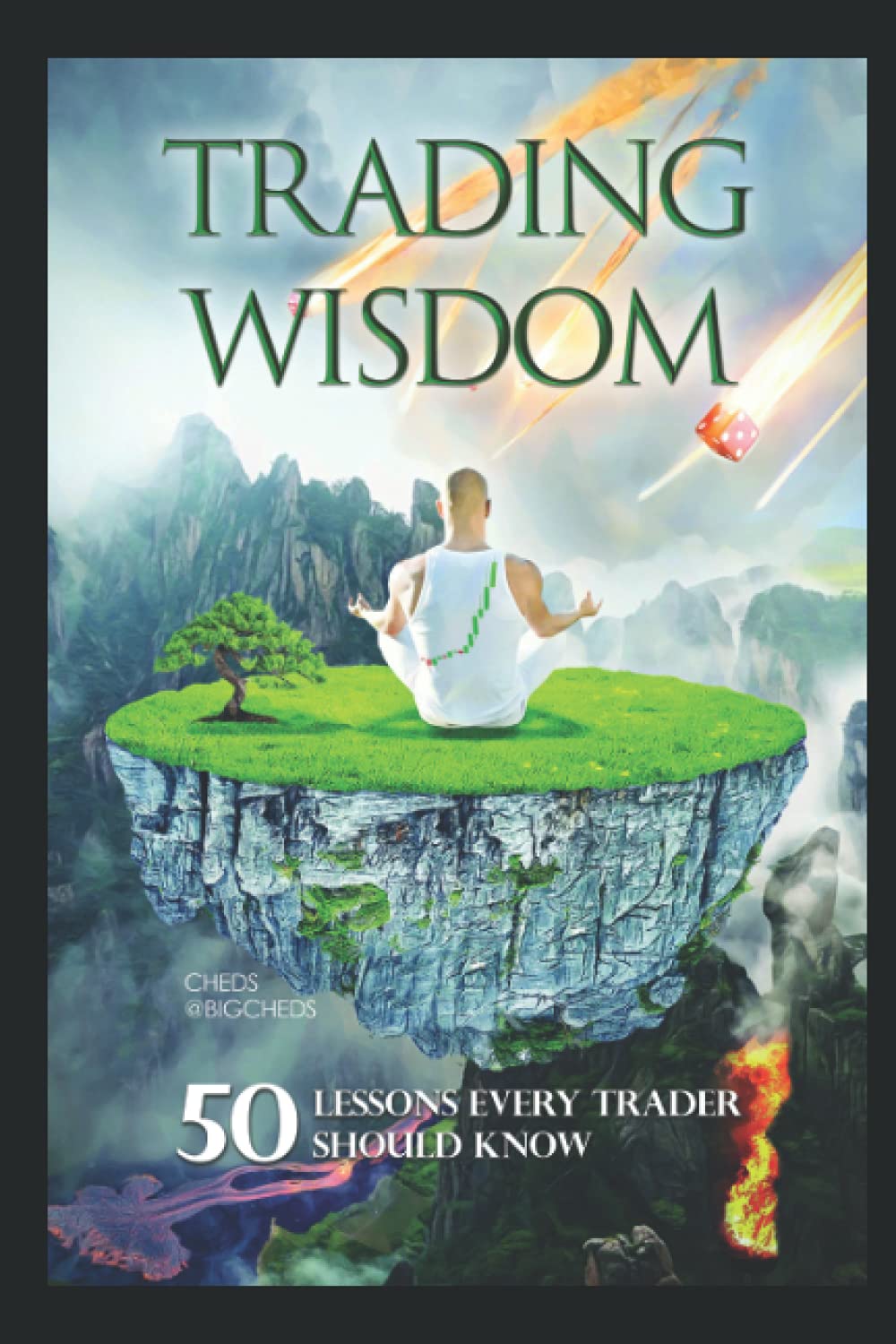 Not a trader? No worries, me neither.

Either way, this is a read worth reading for any investor in the crypto space! This book is drenched of pearls of wisdom for ⅓ on trading psychology, ⅓ on risk management and ⅓ on technical analysis.