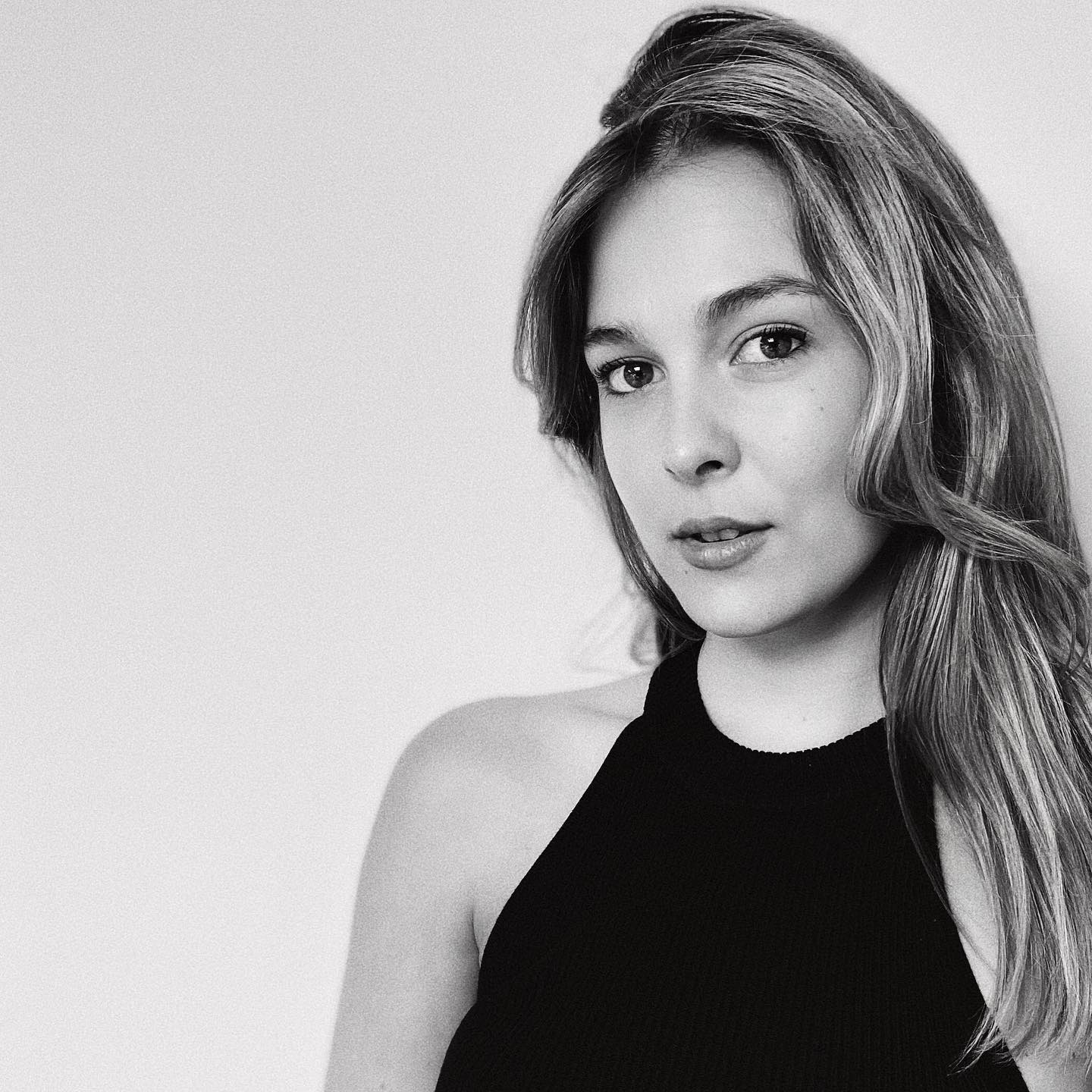 Welcome to the first edition of Izzy’s weekly newsletter!

Guided by my innate curiosity and passion, I’ll be keeping you updated on the latest crypto & NFT news on a weekly basis but not only – I’ll also keep you in the loop of awesome Valuart events and drops you absolutely can’t miss!

Speaking of which… Don’t forget to check out our first podcast episode coming out this week!

But now, let’s get to some juicy news.

Paraguay – The Start of a Crypto Legislation

Today, July 14th, 2021 is actually a crucial day for the future of many individuals as today, Paraguay is going to start laying down the foundations of a new crypto-focused legislation, as they have started the process of accepting Bitcoin (BTC) as an official currency back in June.

The protagonists of this historical moment are Paraguayan Congressman Carlitos Rejala and Senator Fernando Silva Facetti, and on Twitter, the hashtag #bitcoin has been exploding, especially after Friday July 9th, when Rejala tweeted: 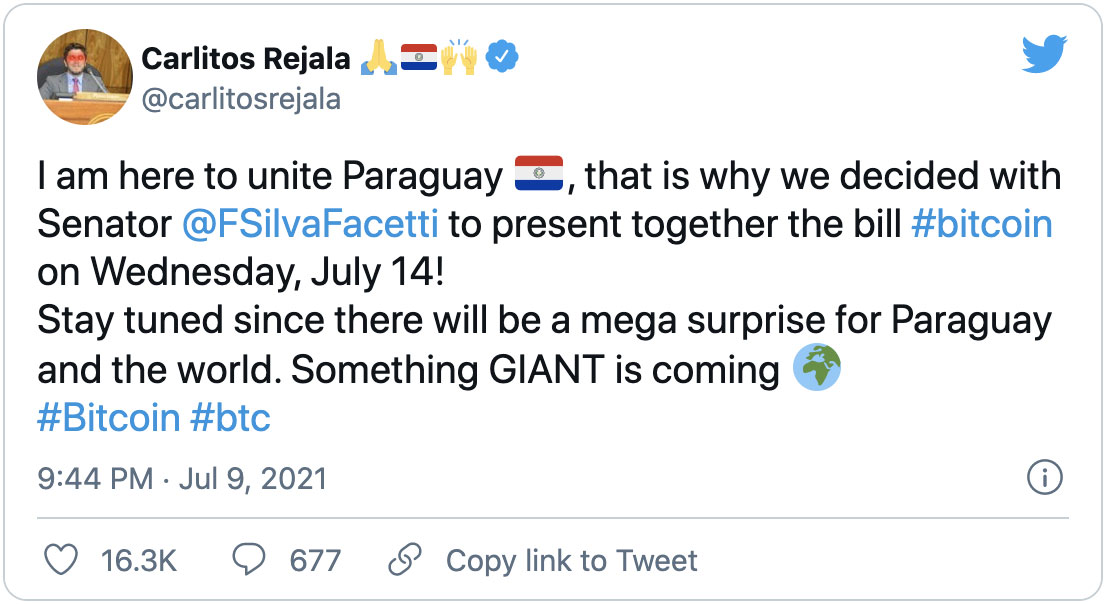 What does this imply?

Unsurpassable innovation, and the opportunity to change the economy and way Paraguay is viewed worldwide – these changes, when solidified, can possibly transform Paraguay into a leading center for foreign crypto investors, businesses and Bitcoin miners.

I am definitely looking forward to seeing how this unfolds and will keep you updated along the way.

Are GenZ & Millenials in South Korea in debt because of crypto?

Following the narrative thread of the need for change and stability, from Paraguay we land in South Korea, where Millenials and GenZ debt is increasing, as they seek financial freedom in an environment characterized by high asset inflation and cut wages.

On July 8th, 2021 the Korean Herald, stated that data from South Korea’s Financial Supervisory Service (FSS) released by Representative Kim Han-jeong, part of the Democratic Party of Korea, shows how high levels of debts are due to an increase in investments in cryptocurrencies, stocks and real estate.

As concern rises, Kim Han-jeong is calling for immediate government measurements…Will we soon be seeing a crypto revolution in South Korea too? Stay tuned.

Probably one of the hottest discussions in the crypto community at the moment – Santander and Barclay banks are blocking payments to the Binance exchange.

The reason? They claim this will help protect their clients from fraud and losses. 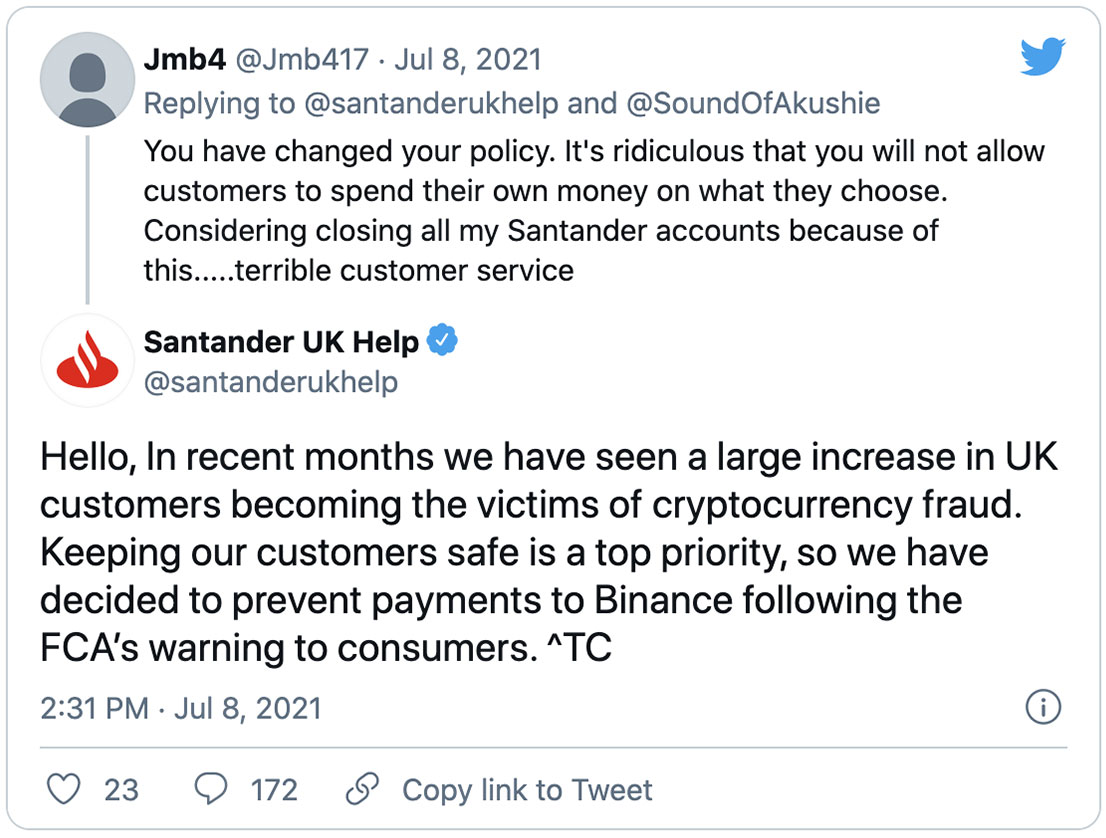 One thing is for sure – Account owners are not having it and have expressed very negative feelings via Twitter.

This could lead to very risky consequences for banks, especially since certain users have been expressing ways to protest against these institutions, such as suggesting 50k + users to completely cash out.

Events like these make it even more clear how crucial it is to have freedom over personal financial freedom and related decision-making…Something that may only be truly obtained through blockchain technology, cutting third-party decision makers out of the scene.

LevX, a former core developer and current contributor of Sushiswap, started introducing the idea of creating a Sushi NFT Exchange called Natto, back in March 2021, on the Sushiswap Forum.

The immediate reaction of the community was very positive, so LevX, along with a group of developers, started working on it but with a slight change – they changed its name to Shoyu, suggested by a user called Umetaku.

On July 9th, LevX’s Twitter account finally released what we are to expect from this NFT platform: 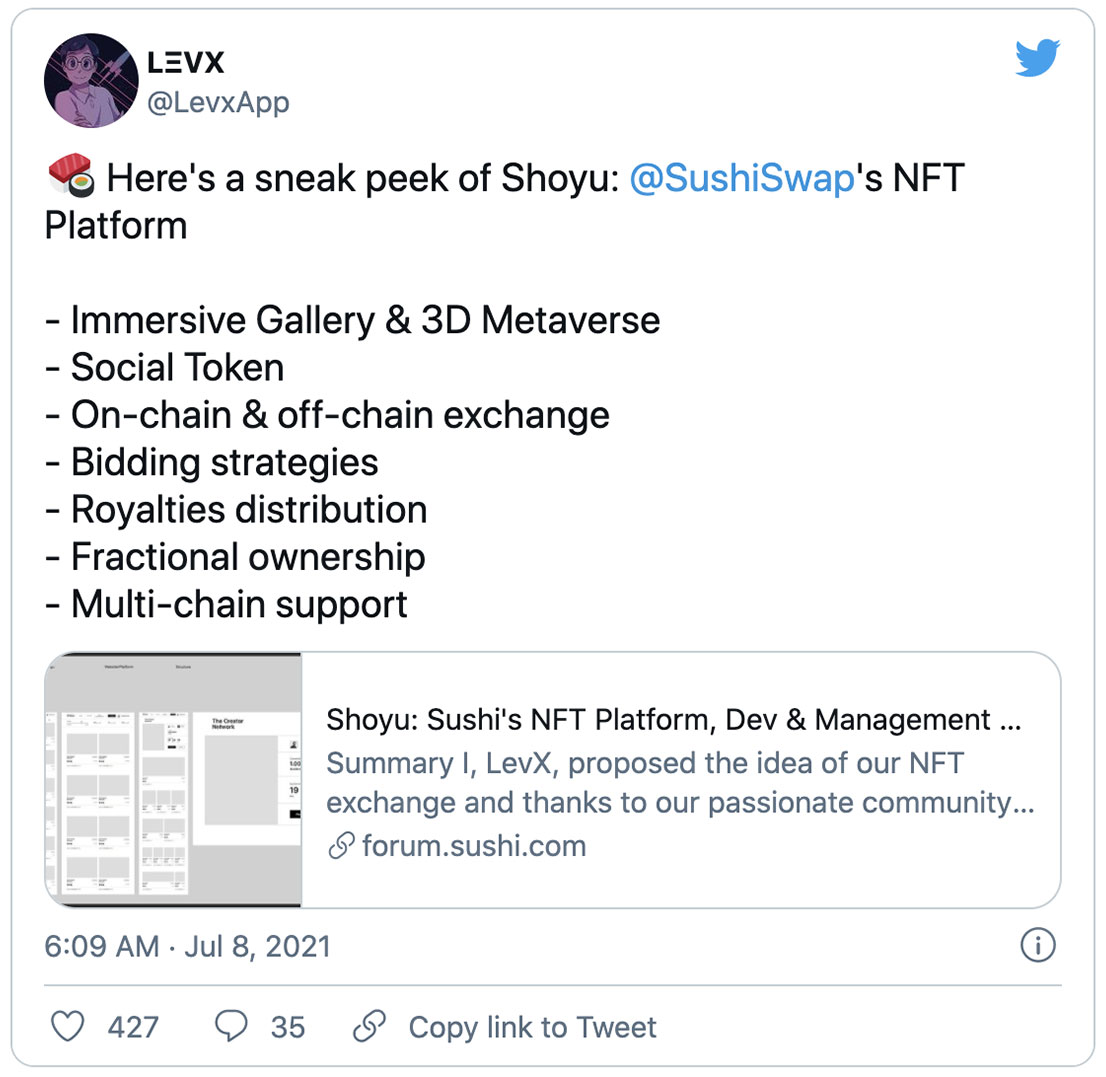 What is most interesting about this product goes beyond the fact that it allows yield farming, but its intention to evolve into a 3D Metaverse in the future.

This is fundamental to the success of the platform, as it may attract many users and corporations, as entering the Metaverse is increasingly becoming a necessity for brands.

Some examples, just to name a few are, Louis Vuitton, with its exclusive capsule collection that featured the League of Legends universe;

Gucci, with its recently sold virtual handbag on the Roblox platform for the equivalent of $4,115;

And last but not least, Boson Protocol who recently invested $709k in virtual Real Estate inside Decentraland, an Ethereum-based virtual world, where they plan to build a Virtual Shopping Centre – Here visitors will be able to buy fashion NFTs which in real-life can then be exchanged for physical versions of the same clothing item or accessories.

We are truly living in some exciting times.

That’s all for this week’s Newsletter, but I’ll see you for tomorrow’s podcast episode, don’t miss out! We have a special guest…