Are you thinking about investing in the Metaverse?

Last week we had such a cool conversation with the Realm team about the Metaverse, that I want you to absolutely to check out here 👇🏻

Are you thinking about investing in the Metaverse? If so, you’re in time to buy yourself some virtual spaces, as launch is expected towards the beginning of September – You will definitely hear more about this topic from Eddie and I soon.

For today’s newsletter, I’d like to focus on an emerging topic I had honestly not really taken into deep consideration until now.

On Monday, August 16th, Vitalik gave the crypto community a wake up call through a blog post mentioning the need to look beyond decentralized finance (DeFi) and focus on one of the least discussed topics in the blockchain space: decentralized governance (DeGov).

The current blockchain governance system in most DeFI projects is token-based, consisting of them managing protocol upgrades, reward distribution etc. via a voting system, where the votes are distributed among token holders based on how much they hold. The more you hold, the more power.

That being said, there is definitely the risk of whales acting accordingly to support their own economic interests.

1) Proof-of-Humanity: where one vote would be allocated per each of a protocol’s users.

2) Proof-of-Participation: where voting would be limited to the users of a protocol who have completed a task benefiting the project or its community.

3) Quadratic voting: where the power of a single voter would be proportional to the square root of the economic resources that they would commit to a certain decision.

Tezos is among the DeGov pioneers – for example, if Tezos’s on-chain governance gets attacked, the community could automatically hard-fork and avoid any losses beyond coordination costs.

I’m sure we will be seeing a lot more discussions on this topic.

Speaking of hard-forks, I’d love to bring us back to the attack an NFT player underwent around a month ago – Bondly team finally announced they will be setting their redeployment countdown clock on August 23rd.

*Edit on August 23rd* – It’s official, the redeployment is going to take place this Friday, August 27th at 11am UTC.

However, the community still seems to be lacking in trust, as Twitter comments continue to show: 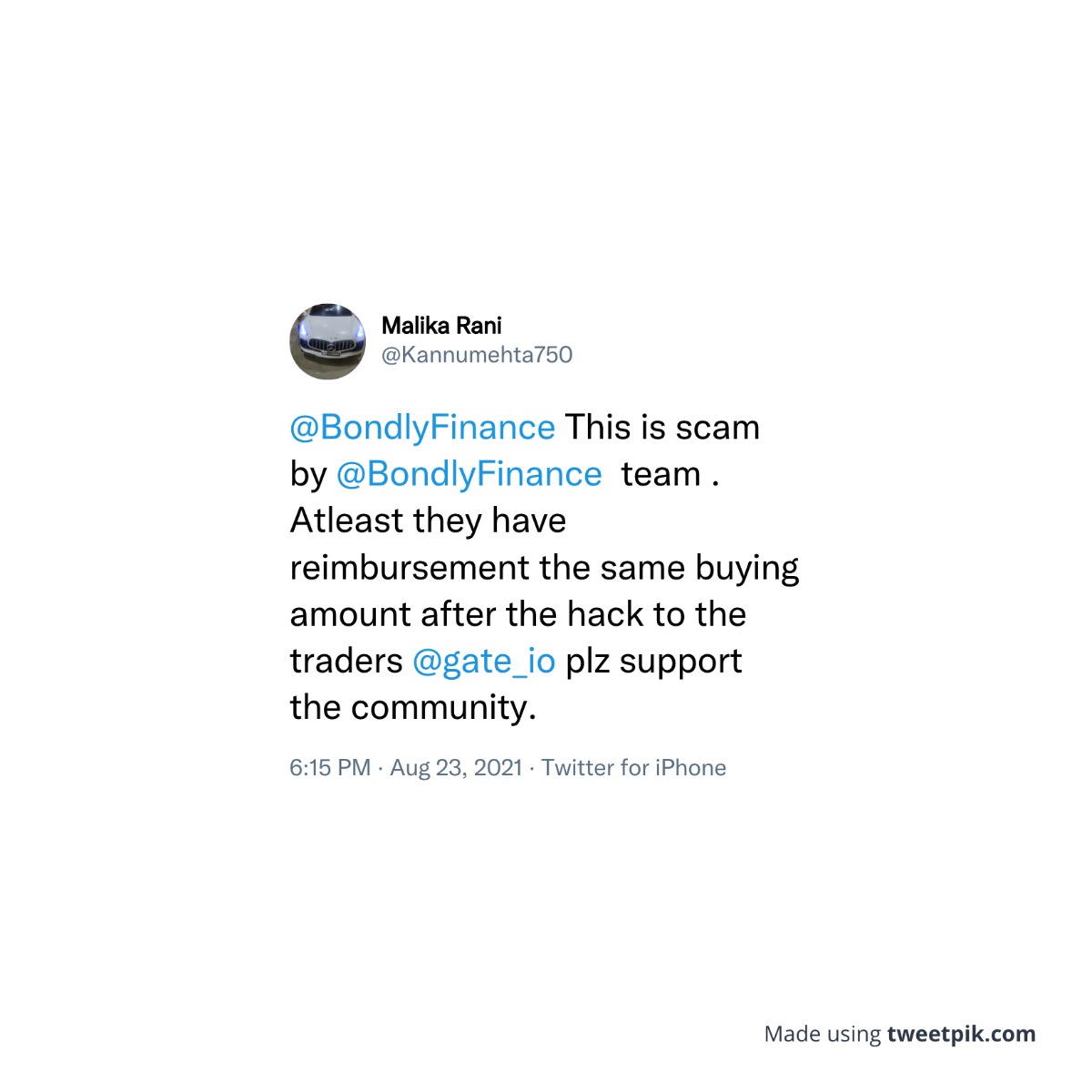 Stay tuned for the next podcast, where I will let you know how this turns out.

Wrapping up the news for this week, I’d love to bring your attention to some huge news in the blockchain space: TikTok announced its partnership with decentralized music streaming service Audius for its first music integration.

This is massive news as it has chosen a blockchain-powered solution instead of the current music streaming leaders such as Spotify, Apple Music and SoundCloud just to name a few.

Unlike these familiar mainstream platforms, which are not blockchain-based, Audius is built on the Ethereum and Solana blockchains and is run by a community of token holders, around 5 million at the time of writing.

Thanks to this partnership, artists on Audius will be able to effortlessly export their songs to TikTok for content creators to include in their videos and be able to subsequently link their following on TikTok back into Audius.

TikTok has a colossal user engagement rate, resulting in major exposure for over 100,000 artists on the Audis platform.

As of July 2021, TikTok reported that 75% of its United States-based users say that they use the app as a means of discovering new music.

Excited to see if this is just the start of other blockchain-based solutions being adopted by other major social platforms.

In this week’s edition of Izzy’s Book Club, I suggest reading one of my latest reads: The Augmented Workforce: How Artificial Intelligence, Augmented Reality, and 5G Will Impact Every Dollar You Make by Cathy Hackl, aka the Metaverse Godmother.

If you do not know Cathy, you should definitely also check out her articles on Forbes, where she curates “Metaverse Weekly”.

Through this book, Cathy gives you a brief description of the six pillars of technology and how they are going to change our lives forever, sooner than expected.

Not only does this book describe how these technologies will converge in harmony, but how they will transform every industry, especially the way we collaborate in our workplace.

Check out one of my fav excerpts:

“From a logical standpoint, it’s more likely that the future will be “protopian.” The world won’t be perfect and happy, but it won’t be an abysmal dystopia either. This means there will be positives and negatives, but overall, it will be a better world. Digital marketing consultant Marcus Wong writes, “Protopia defines a state where we’re no longer fighting for survival (Dystopia), nor are we accepting perfection (Utopia…. Every opportunity to create something new, something faster, something ‘better’—creates a new world of problems that we would have never initially created. This is not a bad thing; some problems are good to have.”[29] In short, we can’t eliminate problems without introducing new ones. This is why we will see progress, but not perfection.[30] Will robots take some workers’ jobs? Yes. There will be automation, but automation will also generate new jobs.”

How do you imagine the future of work?